Translating the role of Mitochondria in Tumorigenesis
Close
HomeBlogNewsTRANSMIT AT THE EUROPEAN RESEARCHERS’ NIGHT... 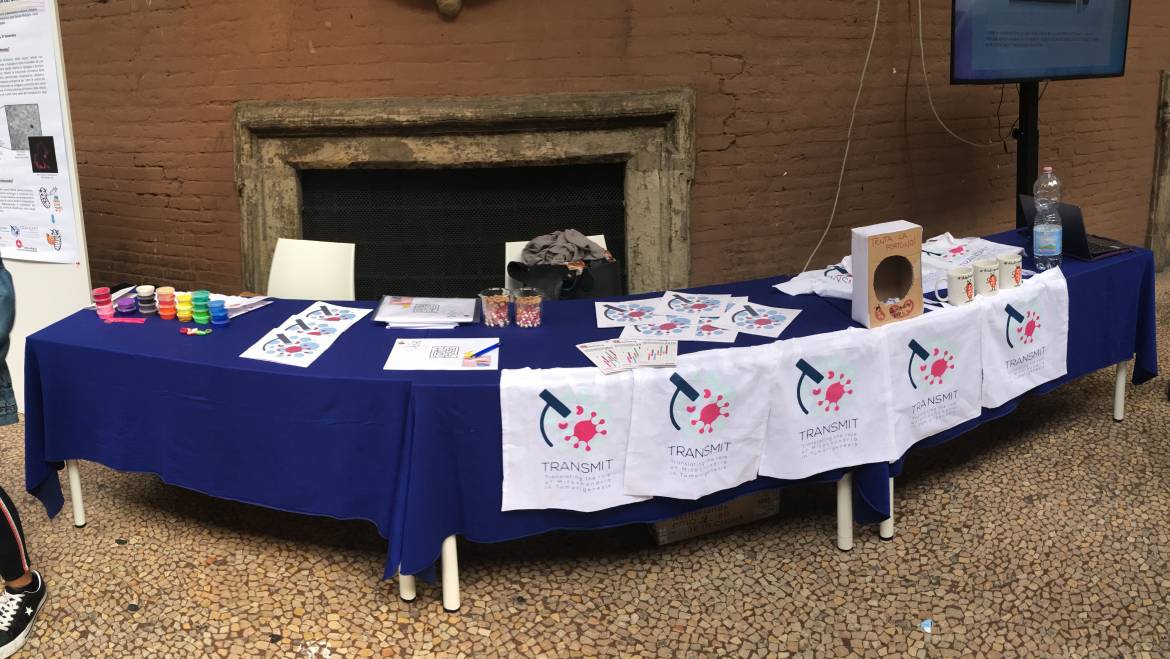 TRANSMIT participated again in the European Researchers’ Night held in Bologna (Italy) on September 27, 2019. This year, however, attendance at the event was on behalf of the entire TRANSMIT Consortium. Unlike the previous edition, our Early Stage Researchers were not able to take part in the local event organised in their working country, since that same week they were attending the Aegean international conference on “Tumor Microenvironment and Cellular Stress: Signaling, Metabolism, Imaging and Therapeutic Targets” in Crete (Greece), one of the mandatory conferences scheduled in their Personal Career Development Plan (PCDP).

Despite this, the UNIBO Coordination Team decided that TRANSMIT would be participating this year anyway. The project was present at the local event held in Bologna (Italy) on September 27, representing the Consortium and the project as a whole. The activities proposed on the night were carried out with the collaboration of other members of the staff: key personnel Luisa Iommarini (Senior Assistant Professor at FaBiT), Giulia Girolimetti (Post-Doc fellow at DIMEC) and Giuseppe De Bonis (Management and Dissemination Assistant). They were joined by the creators and “true heart” of this year activities: Manuela Sollazzo (Post-Doc fellow at FaBiT) and Stefano Miglietta (PhD student at FaBiT), assisted by the precious aid of Monica De Luise (Post-Doc fellow at DIMEC), Serena Aleo (PhD student at FaBiT), Licia Bressi, Maria Iorio and Greta Tedesco (all PhD students at DIMEC).

In the wake of the 2018 edition, the activity proposed this year was also addressed to children. It was entitled “Discovering Mitochondria with Charlie” (Italian title In viaggio con Charlie alla scoperta dei mitocondri). The young visitors were encouraged to create a model of a mitochondrion with some plasticine of different colours, and then to help their new friend Charlie find his way in a labyrinth printed on a sheet of paper with the final aim of transforming food into energy. At the end of this experience, children were given some fruit jams contained in a small plastic test tube (“their own dose of energy”) and distributed an informative booklet, especially designed for them, in which Charlie explains to his new friends what the cell and the mitochondria are.

Along with this activity for the younger public, an activity specifically addressed to adults was also carried out (the children’ parents and the interested visitors). A gallery of images of mitochondria was projected on a screen together with a poster, accompanied by a more “social” activity. Visitors were asked to take a photograph with the shape of a cardboard mitochondrion and upload it onto their social media profiles (Twitter, Instagram or Facebook) using the hashtag #MitoFriendsERN2019. The intent was to exploit the communicative potential offered by social media for dissemination and outreach purposes. Once the photo was posted, the participants were asked to “draw lots” in a prize competition that offered as a reward the chance to win one of the three hand-drawn mugs with the picture of a mitochondrion. The consolation prizes consisted of some project gadgets: a pen, a notebook, a shopper bag and the project brochure.

Download the complete programme of the event in Bologna here (in Italian).